For the analysis, CRIF examined almost 3 million companies in Germany with regard to their creditworthiness and financial strength. This includes, among other things, information in the balance sheets, profit and loss accounts, sales figures, payment experiences or judicial negative features. According to the analysis, the number of financially weak companies increased by 15.6 percent in November 2022 compared to March 2022. Accordingly, 301,516 companies or 10 percent of companies in Germany currently have an increased risk of insolvency.

“The high energy costs, the existing problems in the supply chains and inflation are causing problems for many companies. In addition, there is a reluctance to spend among consumers, who have less money available due to high energy prices and inflation. The resulting loss of purchasing power also weighs on companies.” , comments CRIF Germany Managing Director Dr. Frank Schlein the current situation.

Energy-intensive sectors in particular are currently at risk of insolvency. In addition to the much-cited bakeries, this also includes the ceramics and glass industries, paper manufacturers and the transport and logistics industries. The skilled trades are also particularly at risk of insolvency due to the energy crisis. There are also companies from the catering trade, beverage production, hairdressing salons and gardeners and landscapers. In these sectors, there were already significant increases in corporate insolvencies in 2022.

Share of companies at risk of insolvency increases by 15.6 percent

A look at the regional distribution of companies with a high risk of non-payment or insolvency reveals major differences. In absolute figures, North Rhine-Westphalia (65,360), Bavaria (37,063), Baden-Württemberg (33,675) and Lower Saxony (26,278) top the statistics of the federal states with the most financially weak companies. In Bremen (2,998) and Saarland (3,002) there are comparatively few companies with an increased risk of non-payment.

In terms of company density, the highest risk of insolvency currently comes from companies in Saxony-Anhalt. Currently, 18.1 percent of the companies there are in financial difficulties and are therefore threatened with insolvency. But also in Berlin (14.8 percent), Saxony (14.5 percent) and Bremen (14.4 percent) significantly more companies are threatened with insolvency than the national average. In percentage terms, there is a lower risk from companies in Bavaria. Here, only 6.5 percent of the companies are considered to be financially weak.

In practice, there are typical patterns of behavior that indicate a precarious situation for companies at an early stage, for example if poor payment behavior, changed ordering behavior or frequent changes in management, bank details or company name occur. However, indicators are also when payments are delayed due to unjustified complaints, verbal promises are broken or copies of invoices are frequently requested. In addition, the affected companies can no longer afford new purchases and use outdated production facilities. Evidence of financial difficulties is also provided by the consumption of equity over the years or the repeated increase in the credit line (use of borrowed capital).

For the analysis, CRIF evaluated a large amount of information on the financial situation of the company, which provides information about solvency. This includes, among other things, information in the balance sheets, profit and loss accounts, employee and sales figures or payment experiences. In addition, information on existing judicial negative features is included in the analysis. According to the current evaluation, 301,516 companies in Germany are considered to be financially weak in November 2022 (reference date: November 11, 2022). In other words, 10 percent of the more than 3 million companies examined by CRIF for the solvency study are overindebted and therefore at risk of insolvency. The affected companies have a current creditworthiness index in the range between 4.5 and 6.0 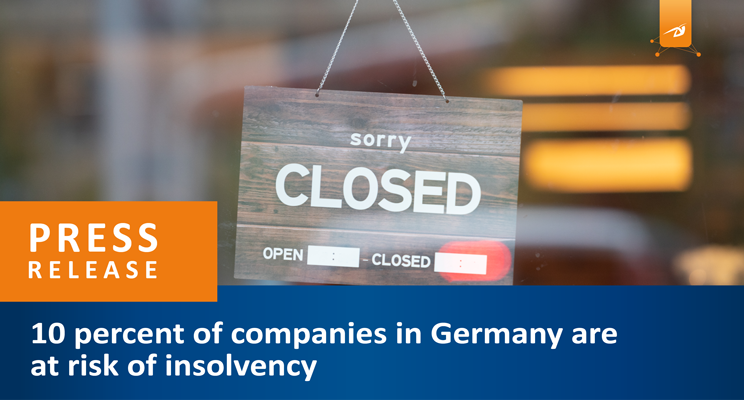