CRIF study: This is how banks can increase customer satisfaction - in the young age group, one third would like support by digital channel

71 percent of Germans expect their banks to be more helpful in times of financial difficulty. This is the result of the representative survey "Banking on Banks" conducted by the information service provider CRIF. The study surveyed 1,000 German consumers in July 2022 to investigate how the increased cost of living will affect demand for financial services in the coming twelve months. The study shows which areas offer banks potential to strengthen customer loyalty and customer satisfaction in times of financial pressure.

The pandemic, inflation, the Ukraine war and the energy crisis have led to significantly increased financial burdens for German consumers this year. As a result, 37 percent of Germans surveyed expect their financial situation to worsen over the next twelve months. "Many German consumers are facing challenges in the coming twelve months that they have not experienced before. To cope with them, they are looking for guidance and support" classifies Dr. Frank Schlein, Managing Director of CRIF Germany. "Our survey shows that many bank customers credit their banks if they succeed in offering individual support tailored to the customer's particular situation. This highlights opportunities for banks." For example, 41 percent of the study participants state that banks should better tailor their products and services to the needs of individual customers in the current situation.

Many approaches for greater customer satisfaction

The results of the study highlight a number of areas that banks can address to better tailor their offerings to demand and improve customer satisfaction. For example, one in three Germans (36 percent) believes that banks should approach their customers more in view of the current situation to help them save money on services such as insurance. When it comes to asset accumulation, 36 percent of those surveyed would now also like more support from their bank.

For Schlein, digitization measures are one way of exploiting the potential uncovered across different application areas: "Among 18- to 34-year-olds in particular, there is a strong desire for greater digitization of processes: around one in three (32 percent) would like to see support provided digitally. In addition, however, digital solutions can also be used to address many issues that were mentioned by all of the age groups surveyed: For example, additional help in improving their credit rating (26 percent), support with financial planning (24 percent) or earlier warning of financial bottlenecks (24 percent). There are now suitable digital tools for all these areas of application."

Digital solutions for a needs-based offering

There is no lack of willingness to share personal data: many German consumers consider it conceivable to share additional personal data - provided it would make it easier for them to take out a loan, for example (30 percent), or help increase their credit limit (25 percent). Under these conditions, willingness is even more pronounced among 18- to 34-year-olds. In this age group, just under 40 percent would increasingly share personal data. "Private information is a sensitive asset that must be handled responsibly, in compliance with data protection regulations and in a customer-oriented manner," comments Schlein. "To build trust, banks need to prove to their customers that they get something out of sharing their data."

Customers are particularly willing to hand over their data when it is used to warn them of financial problems (43 percent) or help them reduce their monthly expenses (42 percent). "Innovations in data management, analytics and digital services hold great potential for customer engagement," Schlein says. "In this way, banks can tailor their offerings to individual customers, helping them with the challenges of inflation and thus boosting trust."

The expectations of German consumers show that the issue will become relevant for all banks in the coming months: according to CRIF's study, one in three (33 percent) fears that their standard of living will fall in the coming year. One in four (26 percent) even anticipates difficulties in paying bills or servicing loans. To prevent this, 65 percent of Germans are looking for a way to reduce spending on food, energy and other essentials over the next twelve months. One in three (35 percent) believe it is likely that they will have to take on extra income to meet the increased costs.

According to the survey, banks are nevertheless perceived as an anchor of stability in the event of a financial emergency. After the family, the bank is the second most popular contact for participants when it comes to dealing with individual financial problems. Of the Germans who expect to be in need of new debt (15 percent), 27 percent would turn to their bank to apply for a loan. However, people often ask their family first (33 percent) or rely on state support (26 percent). Here, too, it is clear that if banks succeed in improving their services, they can exploit opportunities and tap potential.

For the CRIF study "Banking on Banks," a total of 7,000 participants from six European countries (France, Germany, Italy, the Czech Republic, Slovakia and the United Kingdom) were surveyed from July 8 to 25, 2022. A weighted, representative sample of 1,000 adult Germans was evaluated for the statements on consumer behavior in Germany. The study reveals both the relationship of European consumers to their banks during the upcoming financially difficult period and their expectations regarding their financial situation. It is available in full length in English on request to presse.de@crif.com. 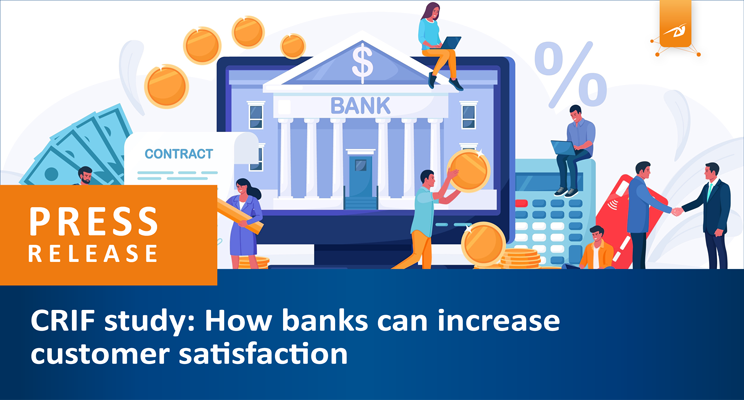